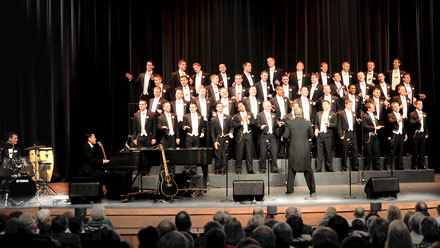 The Purdue Varsity Glee Club, including Greenevillian and Niswonger Scholar Patrick Brown on the drums, at left, presented a stunning concert of eclectic music Friday evening at the Niswonger Performing Arts Center. The group played to a near-capacity crowd.

The highlight of the evening for many in the audience came during the segment by “Ba-Na-Na,” four black-leather-coated members of the glee club who had changed into jeans and white T-shirts.

Patrick performed with this group that features music (and dance moves) made popular by Elvis, Jerry Lee Lewis, Bobby Darin, and the Drifters in songs of the 1950’s and 1960’s.

During the Ba-Na-Nas’ performance, Patrick left the stage briefly and returned with his mother as he – and then the group – performed one of her favorite songs, “My Girl.”

Patrick also presented his mother with one of his two glee club lavalieres, a chain and emblem of the group’s mascot, Purdue Pete, and expressed his deep appreciatin and love for her and his father, adding a hug and a kiss.

Jane Brown said the presentation came as a surprise and was “very emotional.”