Thirty-one college students who are Niswonger Scholars did maintenance at the Old Harmony Cemetery on Wednesday.  Projects included cleaning headstones, and, as shown here, raising and leveling them.

Their Day’s Work Is A Big Help With Cemetery Project.

In the process, they helped the Daughters of the American Revolution with an ongoing project and learned more about this region’s history.

For at least one scholar, Ian Sams, of Watauga, the project turned very personal when he learned that he had just cleaned the headstone of his own great-grandfather.

Dr. Nancy Dishner, director of the Niswonger Scholars Program, said the students, who are enrolled in a total of 18 colleges and universities, are in Greeneville this week for training in leadership, ethics, management and service.

Niswonger Scholars are already involved in community service, she said, because service is one of the criteria, along with academic achievement, by which the scholars are chosen.

Those selected are able to attend any college to which they can be admitted, with costs borne by the Niswonger Foundation.

Dishner said the Niswonger Scholars have been reading a book this spring called The Tipping Point, by journalist Malcolm Gladwell.

The author writes about “epidemics” not in the usual sense of a widespread disease, but as ideas or actions that can have good or bad effects, and impact other things.

Dishner said members of the Daughters of the American Revolution in Greene County have been trying to improve Old Harmony Cemetery for some time by raising money and scheduling volunteer days.

She said the 31 Niswonger Scholars, through a day of service cleaning headstones, trimming, leveling markers and the ground in some places, were able to do a great deal of the work.

DAR member Madge Walker said the scholars accomplished an amazing amount of work in a day, and the DAR is very appreciative.

Dishner said the students were encouraged to see their efforts as part of the overall effort, a “good epidemic” in a sense that “could make an incredible difference.”

She said three members of the DAR “came to show us how” to work on the cemetery, and the organization’s members, by themselves, “could not possibly have tackled the project” in the same way that the youthful, enthusiastic scholars did.

The scholars were also able to see, first-hand, the cemetery’s ties to local history.

“I’m very impressed with the history of the graveyard,” Dishner said. She noted that the cemetery contains the remains of 32 veterans from the Revolutionary War, War of 1812, Mexican War and Civil War.

She said students saw that members of Revolutionary War Gen. John Sevier’s family are buried there, and “even Abraham Lincoln has family members buried there.”

As students worked, she said, some began to realize they were “clearing a section that belonged to a whole family, and I would hear them calling a family member by name as they tried to figure out” relationships, and the time periods in which those who were buried there must have lived.

When Ian Sams was cleaning a headstone that bore the name “McGinnis,” she said, “something rang a bell with him.”

Sams used his cell phone to call his mother in Watauga to see if there were any McGinnis ties to his family.

“That is powerful to these kids,” Dishner said. “That is the message I was trying to get across, that it is important that they put their work into the community – and they get it.”

“It was a very special day,” Dishner said, not only for Sams, but for all of the Niswonger Scholars. 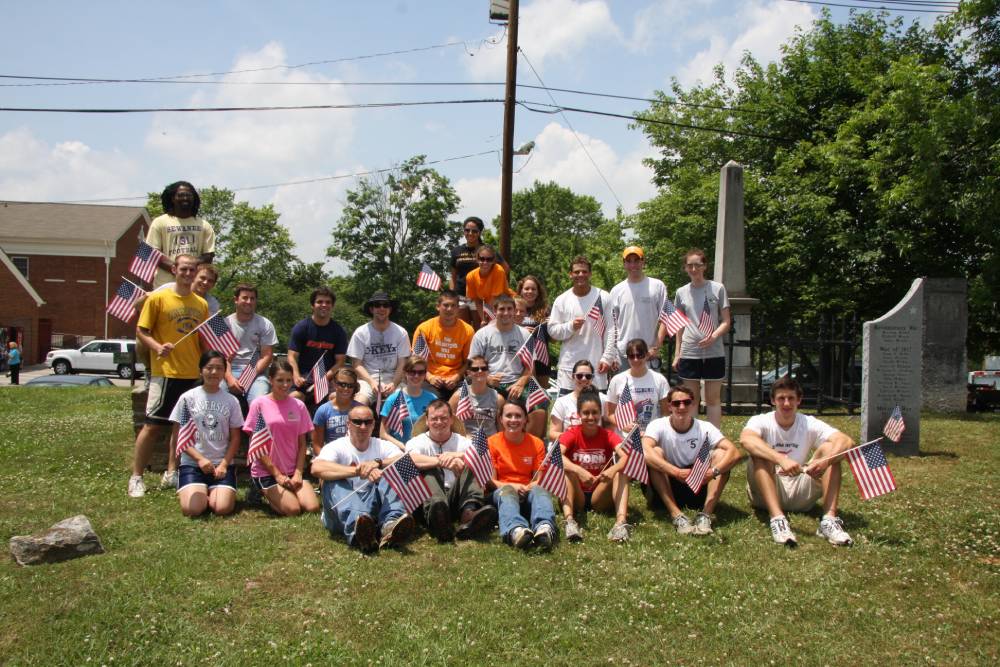