Scott Niswonger was born in Van Wert, Ohio where he learned to fly, soloing on his 16th birthday. During his aviation career, he has flown everything from J-3 Cubs to the Boeing 747.

After graduation from Purdue University, Mr. Niswonger moved to Greeneville, Tennessee as the corporate pilot for the president of The Magnavox Company. In 1973, Niswonger started a cargo airline, General Aviation, Inc. After selling General Aviation he became the Vice President of North American Operations for Flying Tiger Lines – a military contractor and global cargo airline. He later co-founded a second transportation company, Landair Services, with an initial investment of $2,000; and in 1990 formed Forward Air Corporation. Those companies today have annual sales of over $1 billion. It’s impressive to note that he founded the first two companies to ever be taken public in Greene County’s 233-year history. Niswonger currently serves as Chairman Emeritus of Landair Transport, Inc. and Forward Air Corporation (NASDAQ:FWRD).

He is a former member of the Executive Committee and Board of Directors of First Horizon National Corporation (NYSE: FHN), the parent of First Tennessee Bank, an $87 billion financial services company. He is the Chairman of East Tennessee State University Board of Trustees and a 30-year Trustee of Tusculum University. At Purdue University he is a member of the President’s Council, Deans Council for Purdue University Polytechnic Institute, board member for the Purdue Research Foundation and Chairman of Purdue Aviation.  Mr. Niswonger was inducted into the Tennessee Aviation Hall of Fame in 2019.

Scott Niswonger is also the Chairman of the Niswonger Performing Arts Center in Greeneville TN and serves on the Board of Directors of Ballad Health, a 21 hospital – healthcare enterprise with over 15,000 employees.

He is especially proud of the Niswonger Foundation that he established in 2001 to create opportunities for individual and community growth through education and other sustainable projects. This educational operating and charitable foundation currently has 20 scholars in universities across America and 81 alumni. The Foundation supports numerous programs and partnerships with school districts in Northeast Tennessee. The Foundation has an annual program budget of more than $5 million and has invested nearly $70 million in the region.

Niswonger is the lead benefactor for the Niswonger Children’s Hospital, which is home to one of only eight St. Jude Affiliate Clinics in the world.

With an exceptional level of involvement, businessman and philanthropist Scott Niswonger has made a positive impact for those who will follow.

Scott and his wife, Nikki, have 4 children and 8 grandchildren. 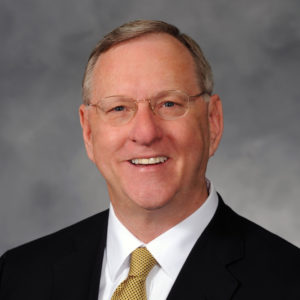