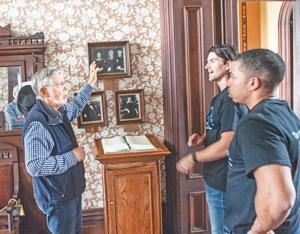 Patrick Darby (center) and Trey Dodson listen as
Glenmore Chair, Phil Kindred discusses the Branner
and Jarnigan families (in photos) and the years each
family lived in the home

A new model for collecting and sharing local history is coming together in Jefferson County, thanks to the efforts of three JCHS and Youth Leadership alumni.  Their interest and willingness to give back to the community that empowered them is charming local leaders with whom they are working.

Called “Let’s Chat,” the project is developing into a multifaceted operation that will meld oral histories, online research and what are being called “landmark videos” into digital presentations focused on the places and people that embody Jefferson County’s history.  The undertaking is ambitious, with a goal of between 45 and 50 digital videos that reveal facts, anecdotes and narratives embedded in buildings and places.

It began simply enough, with a Thanksgiving 2019 visit Trey made to his grandmother, Edna Glenn, in Jefferson City’s Life Care Center.  What he thought might just be a few minutes of “hellos” and “love yous” became a magnificent couple of hours during which she reminisced about being a child and young woman in Jefferson City.  Her stories noted the fact that family members had been servants at Glenmore Mansion, where she said the matriarch Mary Jarnigan had been benevolent.

Shortly thereafter, while on a beach trip with the Bobby Jenkins family, Nancy Fox regaled Dodson with similar stories about the Douglas Lake area.  She told him she had taught children whose family members had “worked for the Swann family.”

He said he couldn’t help but compare and contrast the stories he learned from both sides of the county that he thought he knew so well.  The back to back experiences set the hook.

“I was like, I have learned more from these two conversations than I learned from a (local) historical standpoint at the high school.”

Beyond his own enlightenment, Dodson said he realized in the moment what getting to share stories meant to the teller.

“There was a whole new energy and light,” he said of his grandmother.  “She lit up in a way I hadn’t seen in years.”

That was the very beginning of a prototype that has evolved and that he is working with fellow JCHS graduates Patrick Darby and John Turner, both of whom are likewise Youth Leadership veterans.  Each makes a point to return and work on the project together when they can adjust their schedules to make it so.

Dodson, a 2012 alumnus and Niswonger Scholar, works in Dallas, Texas, as a human capital senior consultant with Deloitte.  Darby, of the 2013 class, is data analyst in process improvement for PepsiCo and based in St. Petersburg, Florida.  Another Niswonger Scholar, 2019 JCHS graduate John Turner is a sophomore economics major at the University of Tennessee and a Knoxville resident.

The trio came home three weeks ago for a few days of collaboration and one dedicated to shooting footage and interviews at the Jefferson County Courthouse and at Glenmore.  They have been pooling their resources to cover expenses while working on budgets and getting to the stages when money is coming in from other sources.

The team members say they are pleased to work with County Historian Bob Jarnagin, JCHS teachers Brandy Arnold and Lani O’Connor and students who will collect personal narratives and become content providers.

“I want anyone, anywhere to be able to log on to the website and get lost for maybe an hour or two and learn about (our history),” Dodson explained.  “I’ve told Patrick and John, it was just an idea I had, ‘Oh, let me record my grandmother, let’s record some of these stories.”  And I’m just so thankful I thought to do that…I’ve gone back to that video three or four times, just since she passed (January 30).”

As well as meaning informal conversation, “CHAT” is also an acronym that explains four missions encompassed in the project.  They are: community engagement, historical preservation, academic development and technology adoption.

Along with preserving personal and community history narratives, the endeavor will match high schoolers with senior citizens, in part to grant them creative outlets while fighting the loneliness made worse by a year’s worth of isolation.  The Edna Glenn Scholarship will foster educational growth and incentivize excellent works and, finally, the campaign will help make electronic tablets available to older folks in hopes of fostering connection and continued storytelling.

Darby says he has been surprised by two things.  “The sheer support and excitement that people in the community, organizationally and personally, are having about this project.

“And, two, how much I have learned in just a short amount of time about Jefferson County.  I mean, I think when you’re a high school student and you’re going through the motions and you’re in classes and you think about field trips and those things that you take.  But, I didn’t really appreciate as much of the history of where I’m from as much as I do looking back now that I don’t live here.  I’m looking back and thinking “Oh my God, this is so interesting.”

A bonus to the enterprise is the fact that the three feel like they are reaping firsthand the benefit of para-educators like Jarnagin, Glenmore’s Phil Kindred and others in the course of capturing interviews.

“Even today with the history and fun facts that Phil was giving us (a few minutes before) I was blown away with just the amount of history and how interesting I find it is now,” said Darby.

Their operating procedure during the shoots has been to engage the experts in conversation beforehand, and then leave them alone to work strictly with videographers from Lion’s Creative.  Dodson says the twofold benefit is that allows the presenter to focus on the material while he, Darby and Turner learn the history firsthand when they watch the recordings in the post-production stages.

“Our town through 10,000 stories,” noted the backs of shirts each member of the triad wore the day of the shoot.

That means they are interested in Jefferson Countians who have stories and who would love to tell them to high school students and frontline screeners.  The pandemic and vaccinations and reduced COVID rates all factor into the process, but a main takeaway is that collectors are going to be interested in talking to those who can help paint a collective portrait of this place.

A key to the success of Let’s Chat is businesses and corporate backers who will ante up the cost of videos like those in the works for the Courthouse and Glenmore.  Along with partnering for the project’s success, underwriters can receive exclusive sponsorship rights and what the team says are promotion benefits each time a viewer watches a particular production.  (Those interested in learning more in general, making financial contributions or inquiring about underwriting opportunities may do so at www.projectletschat.org.)

Jefferson County Chamber of Commerce President and CEO Derrick Collins says the new program developed by the three Youth Leadership alums is yet another demonstration of the success of investing in JCHS juniors.

“All of these guys were in different classes in different years,” he said.  “And for them to come back to this community to foster a program of this magnitude for this county, it’s exciting for us.  It gives us a chance to see that this program that we work on so diligently pays off in new ways.  We’ve always known it was successful but now people and Chamber partners will see that for themselves.”

Turner hopes he gets to back home for his livelihood at some point in the not too distant future.  During a break from shooting, Collins and Turner laughed about the day they had a conversation about the future.

The then economic development leader asked the student about his dreams.

“Well, I’m not trying to be disrespectful, but I’m actually coming after your job,” Collins recalled.

The community entrepreneurs say they would not be where they are without Chamber support, including money the body made available for the initial shoots.

“The lion’s share of the credit for how much progress has been made we need to give to Derrick and (his colleagues) Crystal (Morgan) and Donna (Yates),” complimented Dodson.  “They are managing economic development during a pandemic and are therefore super busy and they say ‘Yeah’ when we ask if they have an hour to talk about this or that.”

County historian Jarnagin said his young friends’ interest and enthusiasm has blown him away.

“I am absolutely thrilled these guys want to do this.  Let me tell you, for years there have been people in Dandridge that I have wanted to do this sort of thing with.  I wanted to interview them, or record them to get their stories down, but you wait a little while and pretty soon they’re gone.

“I’ve always said, while doing walking tours and other things, I enjoy the school kids because I want this, our history, to carry on.  Each generation needs to carry on the history of the county so that it does not die.”